The arid argot of the estate agent’s schedule becomes obsolete when the task is to sell a pub-restaurant at the edge of a Highland wilderness. It’s like trying to describe the glory of the Lake District with a quadratic equation.

The pub in question is The Puffer. It is the pride of Easdale Island, one of the storied Slate Isles off Scotland’s west coast in the Firth of Lorn and the smallest permanently inhabited of the Inner Hebrides. But this is no ordinary sale – aside from The Puffer’s current proprietor, each of the other 61 of the island’s inhabitants (it might be 62 but no one’s ever really sure) feel they have an emotional stake in its future.

“We’ve had quite a few notes of interest but for me it’s not simply about getting the right price,” says Keren Cafferty, who has owned the pub for the last 10 years since arriving from Edinburgh, where she had been running a small catering business. “I have a responsibility to my fellow islanders to ensure that the new owner is the right fit, not just for The Puffer but for the whole island and the people who live here.”

Get the new owner wrong and she will have to answer to those friends and neighbours. “I’m still intending to live on the island,” she says.

Prospective buyers seeking the island idyll of their fantasies would be advised to dispense with any notions of a jolly. Forget dreams of serving craft beer to couthy locals in a pub that never shuts while the Northern Lights shimmy in the skies above. Easdale is a working island, where each inhabitant may be called upon to attend to the needs of a neighbour at any hour of the day or night.

“You don’t rock up here for the quiet life,” says Cafferty, who arrived with her husband after they decided to get out of the big-city environment and start to “live and breathe properly while we could still appreciate it”.

“It’s not easy but it helps if you’re prepared to rub along with your neighbours and to make those sacrifices that are always required in building friendships and relationships,” she says. 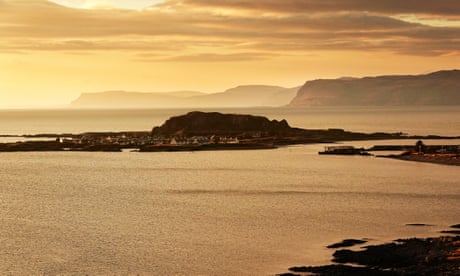 Two of the freshest arrivals who have just started to experience the close-knit life on Easdale are Tony Doughty-Godchaux and his American partner, Britt. They arrived two years ago with their son, Henry. They had been living in London when they read an article in the Observer over Christmas 2015 about how this tiny Scottish island was trying to attract people to make a home and a future here.

“I’ve always believed that everything happens for a reason,” says Tony, a paediatric nurse from London. “When we read the article we just felt that now was the time to make the change. In London we felt we were running up a down escalator. There had to be something better even if it meant having to make some sacrifices, including financial ones. The consequences of Brexit were also beginning to become apparent and Scotland seemed like such a progressive place.”

They feel it has been a good move for six-year-old Henry. “He loves it and the local school [a two-minute ferry ride away] is excellent,” says Britt. “How many other places exist where children can play for hours under the collective supervision of the other islanders who instinctively keep an eye on them? There’s no crime here. It’s such a secure yet open environment and we know that he’ll reap the benefits as he grows up.”

This is an island that punches well above its weight. The Puffer itself, during 10 years of nurturing by Cafferty, annually wins a clutch of awards for its food and drink. The community hall nearby is the focal point for music festivals during the spring and summer months. And then there’s the world stone-skimming championships, which have been held for more than 20 years and attract almost 1,000 visitors and competitors.

Mike Mackenzie, a local builder and MSP for the SNP until 2016, has lived here with his family for 40 years. “The economy of the Highlands and Islands is a very fragile one,” he says, “and Brexit will make things worse. This is farming land and there’s barely a farm in Scotland which is viable without EU subsidies. But Easdale is in rude health and local heroes such as Keren have helped to make it that way. There are some properties on the island to rent and buy. We want more people to settle here and if they’re prepared to work the rewards are endless.”

As Christmas approaches, people have been gathering in each other’s homes to put the final touches to the pantomime which features in Easdale’s three-day new year hoolie. Between the first bells of the new year and noon on New Year’s Day every home on this rock will get a visit from an itinerant troupe of islanders, which grows as each house is visited. At the end of the old year it’s the party to end all parties.